Whatever your opinion is on our Mont Royal, you have to acknowledge the beauty of it and the special look it gives to Montreal. It is among the most representative symbols of our city and wherever you are in Montreal, you can see Mount Royal dominates us all.
This is a must go place from which your view over Montreal will be more than satisfactory as Mount Royal offers several belvederes: could it be on the steep downtown on the south or the Olympic stadium on the east side, you will be more than amazed by the beauty of Montreal and its architectural diversity. You can see how the city plunges into the Saint Lawrence River, how the intense lighting coming from the large buildings and street illumination at night provides such a cosy ambiance.
In summer, enjoy the green touch that takes the city ; autumn get astonished by its indian summer orange and red colors ; winter brings its nuance of black and white ; and spring reveals the city to the eye of the visitor after several weeks spent under a mantle of snow.

Come and enjoy, by foot, by bike, by car, by bus.
And if you are lucky, descend the Mount Royal from the east side to be immersed in the giant reunion of life-loving people on Sundays, with the beat of tens of drums.

Olmsted had planned to emphasize the mountainous topography through the use of vegetation. Shade trees at the bottom of the carriage path would resemble a valley. As the visitor went higher, the vegetation would get more sparse to give the illusion of exaggerated height. City officials wanted a reservoir atop the mountain instead and Olmsted planned a grand promenade around it. However, Montreal suffered a depression in the mid-1870s and many of Olmsted’s plans were abandoned. The carriage way was built, but it was done hastily and without regards to the original plan. None of the vegetation choices were followed, and the reservoir was never built. The mountain is the site of Mount Royal Park (French: Parc du Mont-Royal), one of Montreal’s largest greenspaces. The park was originally designed by Frederick Law Olmsted (who also co-designed New York‘s Central Park) and was inaugurated in 1876, although not completed to his design. 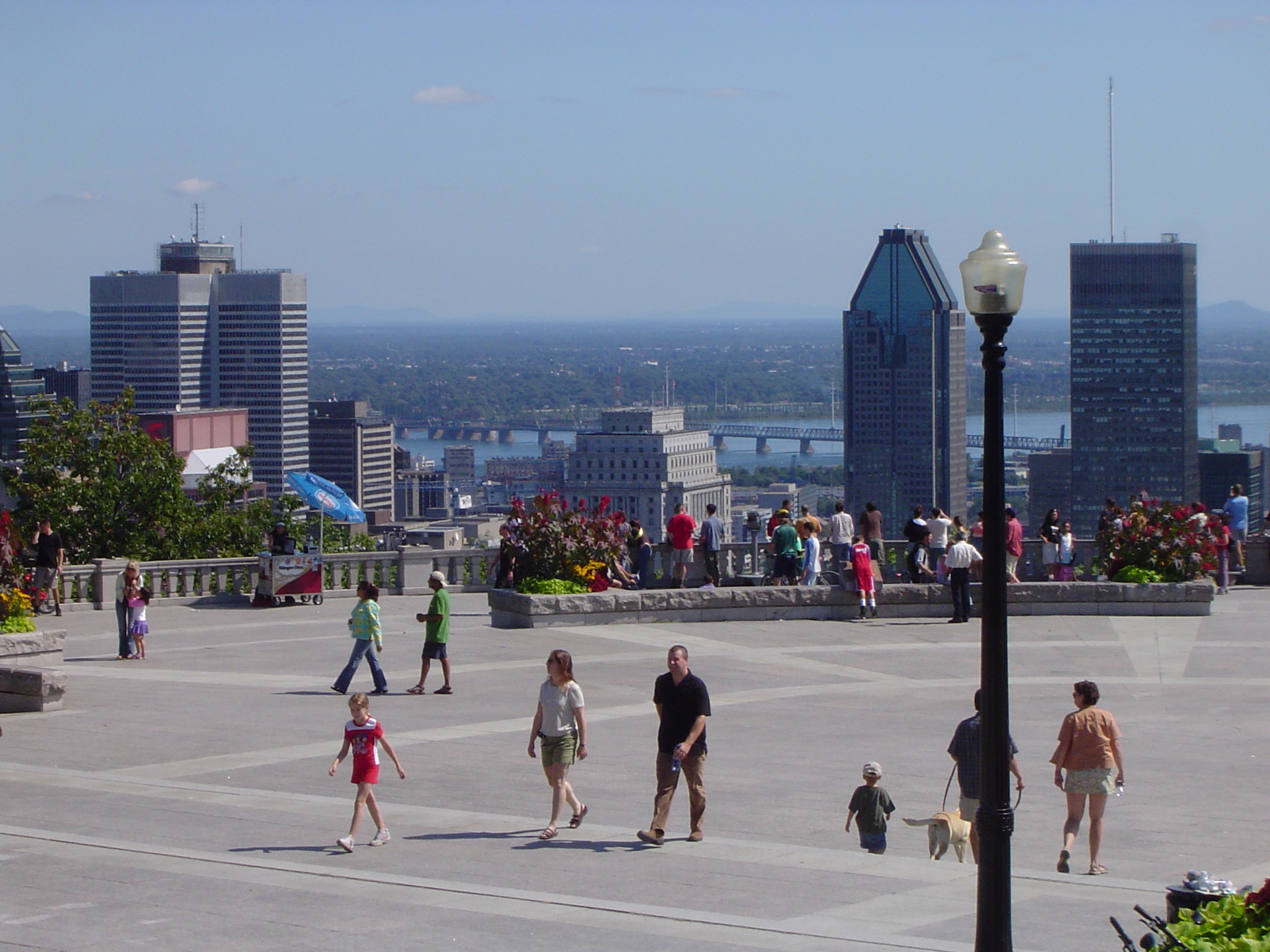 The park contains two belvederes, the more prominent of which is the Kondiaronk Belvedere, a semicircular plaza with a Mount Royal Chalet overlooking Downtown Montreal. Built in 1906, it is named for the Petun chief Kondiaronk, whose influence led to the Great Peace of Montreal in 1701.

Other features of the park are Beaver Lake (a small artificial lake), a snow tube and toboggan run, cross-country skiing trails, a sculpture garden and Smith House, an interpretive centre. At the foot of the hill, overlooking Park Avenue, the park features the George-Étienne Cartier Monument (home to the Tam-Tams) and a gazebo (more properly, a bandstand) which has been named in honour of Mordecai Richler. 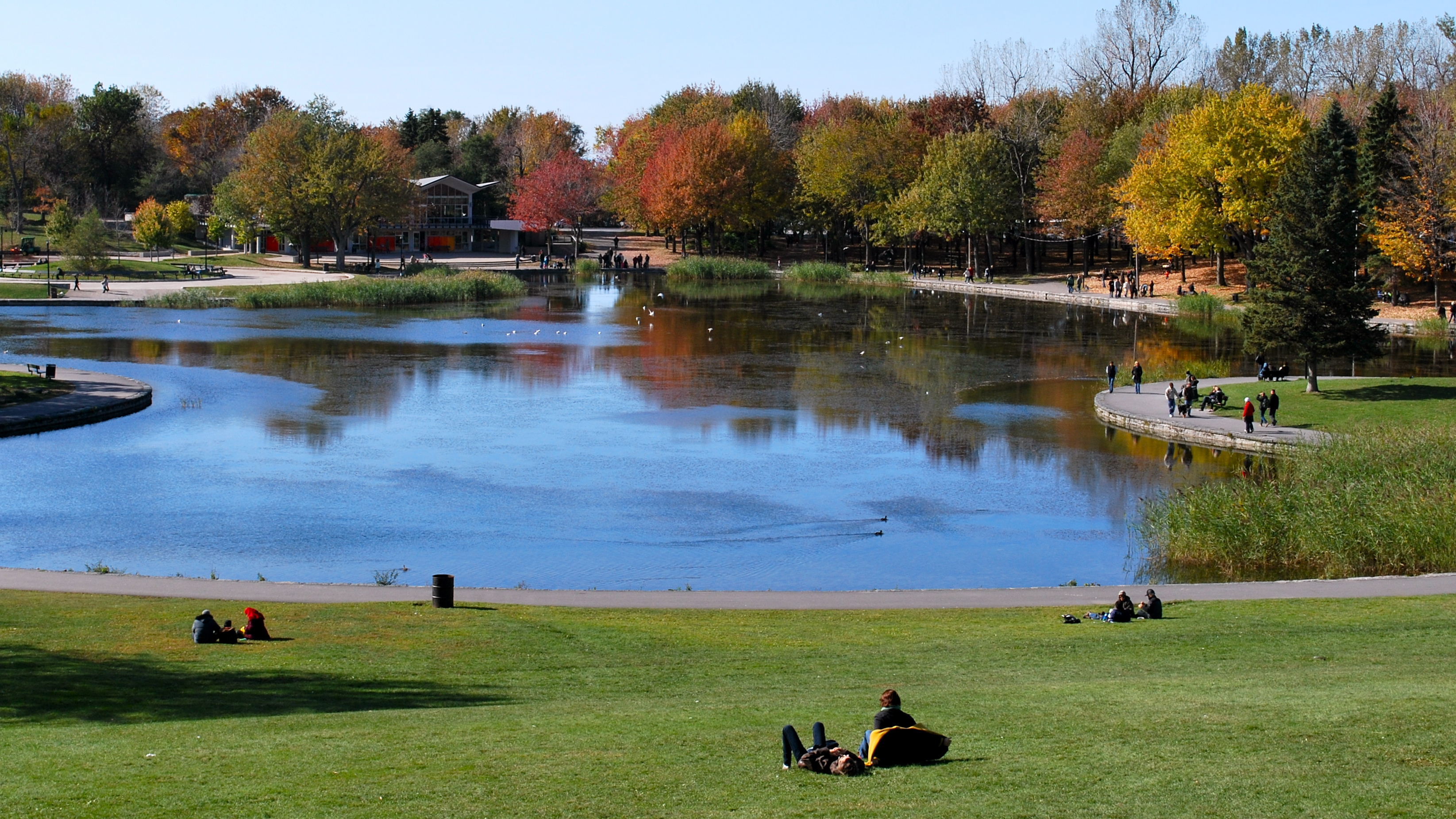 Long about 200 metres (660 ft) of 150 metres (490 ft), Beaver Lake is shaped like a four-leaf clover. Shallow, it is emptied in winter to serve as outdoor rink. The surroundings of the lake are equipped for various recreational activities: skating and sliding in the winter, vast lawns summer.

Built between 1956 and 1958, inaugurated in 1961, the flag of the Beaver Lake is located west of the lake. Designed by architects Hazen Sise and Guy Desbarats, it was considered at the time of its construction as one of the most innovative buildings in Montreal, with its corrugated roof and large windows. It has been renovated in 2005-2007.

The pavilion houses a restaurant named The Pavilion.

In 2007, the Ordre des architectes du Québec (Order of Architects of Quebec) awarded the Excellence Award in architecture to architects Pierina Saia and Réal Paul and to the City of Montreal for conservation and heritage restoration of Beaver Lake Pavillon.

The first Mount Royal Cross was placed there in 1643 by Paul Chomedey de Maisonneuve, the founder of the city, in fulfillment of a vow he made to the Virgin Mary when praying to her to stop a disastrous flood. Today, the mountain is crowned by a 31.4-metre-high (103 ft) illuminated cross, installed in 1924 by the Société Saint-Jean-Baptiste and now owned by the city. It was converted to fibre-optic light in 1992, and then to LEDs in 2009. The cross is usually lit in white, but can now be changed to any colour, including the purple traditionally used upon the death of a Pope.

Beside the cross, a plaque marks the placement of a time capsule in 1992, during Montréal’s 350th birthday celebration. It contains messages and drawings from 12,000 children, depicting their visions for the city in the year 2142, when the capsule is scheduled to be opened.

The former alpine ski slope featured a T-bar and a 100-foot (30.5 m) drop. Mechanical lift devices were first installed in Mount Royal Park in 1945. In the 1940s, there were two and a half miles of ski slopes available. A ski shop was first installed in the park in 1938. Prior to that, in the 1920s, one of the best ski jumps in Canada was the one on Mount Royal, near Côte-des-Neiges.

Founded in 1840, the now-defunct Montreal Snow Shoe Club, with members drawn from some of Montreal’s prominent businessmen, would meet each week during the winter at nightfall on Sherbrooke Street near McGill College Avenue to snowshoe through Mount Royal Park, lit by torchlight. Club members began wearing blue tuques on their outings around 1870. Recently, the tradition has been revived as the Tuques Bleues celebration by the Les amis de la montagne, a charitable organization that works to protect and preserve the park.

In the summer, Mount Royal hosts a popular activity known as Tam-Tams, or the “Tam-Tam Jam”, whereby a number of Montrealers and visitors play hand drums (such as djembes) on the east slope of the mountain, near the George-Étienne Cartier Monument. The Sunday afternoon gatherings attract people of various backgrounds. Often, dozens of tam-tam players perform their art at the same time, encouraging others to dance. In addition, many children and adults participate nearby in a battle with foam-padded weapons.

The Tam-tams began in the late 1970s with a workshop on African drumming at a jazz bar on Ontario Street. It is not organized by the municipal authorities. Despite initial resistance by participants, the city now intervenes in the event, restricting commercial activity to registered members in designated areas and assigning police and first aid technicians to ensure the safety of those present. Although initially controversial in light of the event’s communal and countercultural vibe (as well as a permissive attitude towards marijuana use), the police presence has not led to conflict.